Starting a business was not something Maliesha Pullano always intended to do, but was something that kind of fell into place at the right time. In 2014, Pullano was unemployed and looking for an opportunity. She soon found that The Can Do Kitchen, an incubator kitchen in her hometown of Kalamazoo, was offering a grant to help economically disadvantaged people start a food business. At first, Pullano wanted to start a samosa business – small meat and veggie pastries – with another woman, but after that woman was denied a return visa to the United States, Pullano decided to go in her own direction.

“Samosas were not really my passion, and so as I explored other ideas in which to pitch for this grant I had to think about what I had a passion for,” Pullamo said.

She had always had a passion for coffee, and traveling to Spain taught her to love a strong, bold cup of coffee. Pullano began to do research and looked into how to brew cold coffee specifically.

“I noticed a very new burgeoning trend and product that was not yet in my area, but

showed lots of promise,” Pullano said. “Ignited by the need to support myself and my children Robert Lee (lee) and Lulu (lu),  the concept of Mamaleelu Cold Brew was born.”

That was in 2014. Since then, Pullano has learned a lot about the ups and downs of being not only a business owner, but a black woman business owner in an industry that is largely white and male dominated.

“Being an entrepreneur is a wonderfully terrifying endeavor, for probably all of us,” she said. “When you combine that with being a black entrepreneur, we are talking about a challenge on a whole other level.”

Pullano said she resonated with the idea of, in the business world, it’s okay to make mistakes and fail as long as you pick yourself back up and keep trying.

“But as a black entrepreneur, the axiom doesn’t really hold true,” Pullano said. “Many times we have only one shot to succeed. There are no family funds to bail us out. The wealth disparity in the black community does not provide for a soft cushion to land on if your venture does not pan out.

“This can lead to not being able to take the necessary risks to grow your business, and so it stays stagnant. I have found this to be true in my case.”

Additionally, while black women are the most rapidly growing demographic of entrepreneurs and business owners, they are still the least funded.

Mamaleelu Cold Brew coffees can be found in local grocery stores and markets in Kalamazoo. Pullano offers a couple different ready-to-drink cold brew flavors and roasts ($2.99/each), and even a concentrated bottle ($9.99/each) that can last a coffee drinker for six to eight drinks. 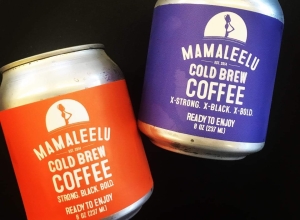 “We use single origin East African beans, which are fairly traded, and organic,” Pullano said. “Our Michigan Roaster uses an exclusive Mamaleelu roast and roasts our beans to order to ensure freshness and quality.”

Looking ahead, Pullano wants to expand her reach, with more customers and markets selling her coffee. She currently produces in a shared commercial kitchen, and hopes to eventually move to a production facility. Finally, she wants to make waves in an industry that she doesn’t see a lot of herself in.

“Getting more involved in the coffee industry, I want to explore the lack of diversity within the industry and have conversations that facilitate actions, which bring about opportunity to those of us who have not been traditionally at the table.”