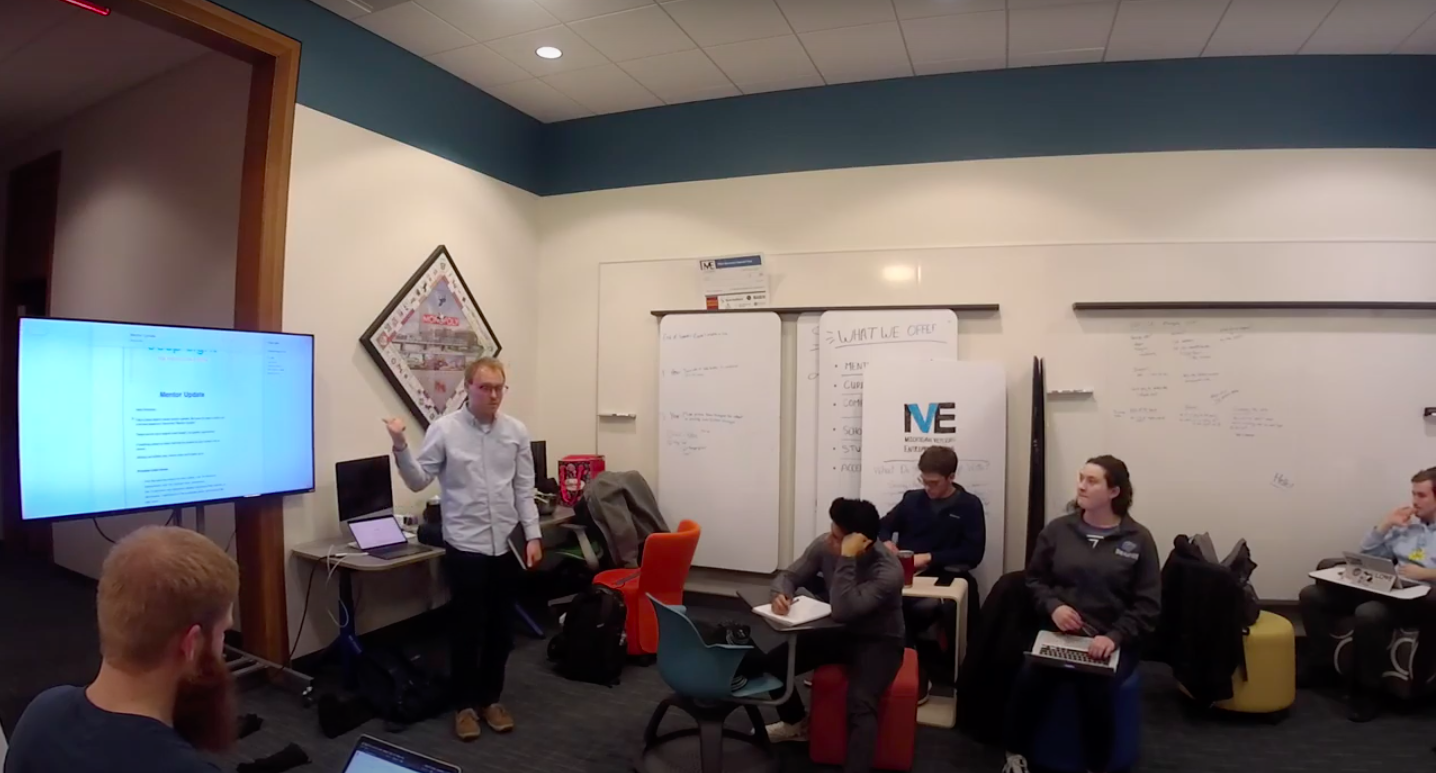 Students who want to solve a problem in their community or society through a product or service have a new opportunity through the 77 Idea Lab at Grand Valley State University.

Named in honor of the first known entrepreneur class to be held at the college in 1977, the program began in January with about ten students led by Matt Gira, Entrepreneur in Residence at the Center for Entrepreneurship & Innovation at GVSU. The program brings students together once a week, outside of classes, to develop a business idea from scratch.

“From the student perspective, it’s figuring out the problem they want to solve,” Gira said. “A, are they passionate about it? And B, is it actually worth selling?”

Before campus closed due to the COVID-19 pandemic, 77 Idea Lab was meeting weekly at CEI to discuss, share ideas, hear from speakers, participate in workshops and receive one-on-one guidance with Gira.

“The creativity that happens in those walls is so amazing,” said Jessica Ludlow, GVSU senior and 77 Idea Lab Participant. “It’s less (now) when everyone’s just on a Zoom call or on audio.”

Ludlow is not like most beginner entrepreneur students, as she’s owned four businesses in her lifetime – which she all references as “learning opportunities.” Now, she is a full time virtual business coach and said she saw the 77 Idea Lab as another opportunity to learn more as a business owner.

“The day of the deadline I saw the flyer,” Ludlow said. “It was a very one-and-done moment, it was kind of cool.”

The program itself moves pretty fast, Gira said, so students have to be truly passionate about their ideas and projects.

Tim Myers, senior at GVSU, went into the Idea Lab with a different idea than he ended with.

“I wasn’t excited to do it, I wasn’t passionate about it,” Myers said, of an idea he had for an airport efficiency app. “So, I sat down and was like, ‘Well what do I really want to do?’ And then I kind of came up with this.”

“This” being Scratchless, a mobile platform for music lovers to purchase and sell vinyl records.

“The ones (apps) that are out there right now, the listing takes a while, it’s hard for people to make sales because it’s tailored mostly towards the record shops, so I wanted to build something that’s tailored towards the individual,” Myers said. “Normal people who just want to go in and buy vinyl and not jump through a bunch of hoops.”

Another part of Idea Lab – that Myers recommends students take advantage of – is that each student group gets a $1,000 grant to jumpstart their idea. This can be used to cover product creation costs, website design, marketing and more. But Myers said the value of the program goes beyond the money.

“At the very least, it’s helpful for me to have other students that are like me… they’re entrepreneurial,” Myers said. “It’s nice to say, ‘Hey, I’m working on this business and this person’s working on their business… Everyone’s in the same realm as you.”

“On the other side of things, it’s also super helpful because you don’t have to pay for top notch business counseling from people who are experienced.”

The program is free to any GVSU student, regardless of major. Students may join as teams or individuals.

Because of the COVID-19 pandemic, Gira was disappointed to cancel a much awaited trip to Chicago for the students, where they were going to tour an entrepreneurial co-working space and arrange potential business meetings.

“He (Matt) was giving us an open five hours to many any appointments or meetings we wanted,” Myers said, who had to cancel a meeting due to the trip cancellation.

While the first round of 77 Idea Lab ended in an unforeseen way, Gira was thankful to be able to transition easily to an online format.

“You can’t get the same engagement that you would in person,” Gira admitted. “Otherwise, the content we’ve been showing is the same, I probably teach it very similarly.”

While this group didn’t get to end their semester with a pitch event, students still feel like they got something worthwhile out of the situation to help them grow as an entrepreneur.

“What I hope to continue from that program is the connections that I made,” Ludlow said. “Being able to bounce ideas off of one another, the other members of the cohort along with our mentor Matt, and helping each other along the way.”

As for the next cohort of the 77 Idea Lab, Gira said that is yet to be decided but is hoped to come back in Fall 2020. Stay tuned for more information and updates at www.gvsu.edu/cei and the CEI Facebook page.