Shannon Cohen is known around West Michigan for her positive attitude and inspiring leadership by the work she’s done through her book, podcast and public speaking engagements.

With the recent societal shift due to coronavirus, Cohen has started offering “affirMAILtions,” or hand written cards mailed to a loved one for a small service fee.

The idea started after Cohen hosted a Rockstar Woman Brunch and hand wrote 200 letters to each guest. She and the guests both felt a personal touch with the cards and Cohen wanted to implement that personality into her business and reach even more people.

“How do we create something that would be so easy that people would use it because it would allow them to touch people and care without adding to their plate?” Cohen said, adding that she would hear from people in the workplace that they want to be able to connect with people more, but don’t always know how to implement it. With the greeting cards, Cohen has taken the work into her own hands.

For six dollars, customers can choose a theme for the card, from “encouragement” to “sympathy” to “birthday,” “Thank you” and “celebrate a difference-maker.” 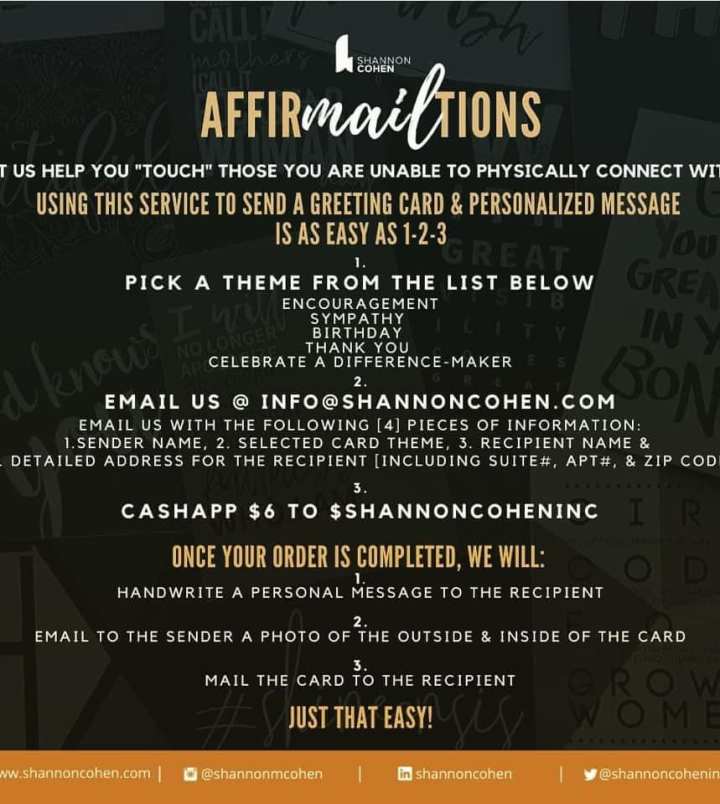 Cohen said the idea for a “custom stationary service” had been in the works for almost a year.

Shannon Cohen, Inc was founded in 2009, a month before Cohen completed graduate school at Grand Valley State University. Cohen graduated in 1999 with a bachelor’s degree of international relations, and again in 2009 with a master’s degree in public administration and nonprofit management.

“I started out as a consultancy firm that specialized in emotional intelligence and emotional wellness training and equity training for leaders across diverse sectors and industries,” Cohen said. “I wanted to use the ‘head and heart approach’ to facilitating transparent conversations about the unspoken truths of leadership coupled with self care strategies to nurture longevity in leadership.”

Cohen began working with companies and “putting out fires” where she could, and realized after a while that she was working hard, but wasn’t dealing with her own emotions.

The turning point for Cohen was when she had a miscarriage two hours before speaking at a national conference in Washington, D.C. She remembers being at the hospital and her coworkers trying to help.

“I think that life sometimes presents us these moments where we have to come face to face with ourselves,” Cohen said. “And I just started to realize, ‘you are not okay.’ You can be successful and not be okay.”

The personal experience for Cohen pushed her even more to encourage people to not hide emotions in leadership and understand that everyone deals with the ups and downs of life.

Five years ago, Cohen gave birth to her son, and after that began blogging about her experiences. Later, that blog inspired a book, “Tough Skin, Soft Heart,” that was published in 2018.

Last year, Cohen launched the “Tough Skin, Soft Heart” Podcast where she brings her words of encouragement to the audio platform.

With some businesses having to change drastically during the coronavirus to follow social distancing orders, Cohen said she’s grateful that her stationary card line was already in the works, making it an easier pivot.

“It just kind of worked out that now, in this season of change, we were able to roll it out,” Cohen.

Find out more about Cohen at her website, shannoncohen.com.