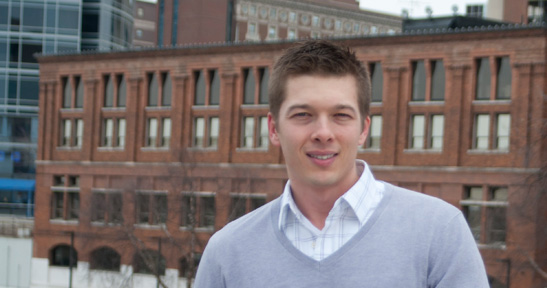 “I didn’t really take a traditional educational route in regards to starting a business.”

Like so many successful entrepreneurs before him, Jason Mascari came up with his big idea while brainstorming with a friend. “We were constantly throwing ideas around for years,” says Jason of his friend and co-founder, Ryan Golden. The two young entrepreneurs first thought of Moasis Global in 2008. In three years, the business has developed from idea to fully patented prototype.

Moasis Global is a web-based advertising platform that allows businesses to target specific geographic areas of interest. The company’s technology enables Moasis to outline an entire city with its patented grid technology and distinguish specific markets. Businesses can then choose to target sections of the grid more heavily with their advertising dollars or decrease spending in others. Users see where competing businesses spend their money and where the greatest market opportunity lies. “Businesses currently overspend in markets that they shouldn’t be targeting,” Mascari explains. Moasis is designed to help change that.

Moasis Global has been operating in stealth mode, developing its intellectual property and validating the assumptions behind the new technology. “The product has morphed drastically from where we began,” Mascari says. In true lean-startup fashion, the team has bootstrapped to get where it is today and is currently seeking seed-round funding.

Mascari points to his team’s mentorship as its biggest asset. “Ryan’s father is an entrepreneur himself and began by asking us the right questions, which helped frame a strategy for us,” he says. As budding entrepreneurs, Mascari and Golding have also taken advantage of discussions with venture capital fund managers, who have encouraged them to continually critique their model and product.

“There is a good energy in West Michigan,” Mascari says. “The startup community has a lot going for it, and I encourage people to jump into the network.” As Moasis Global continues to move forward, he advises entrepreneurs to go for it. “You will get the door shut in your face, but continue to seek validation and trust your vision.”

How has GVSU played a role in your business development?

I learned the tools on how to visualize ideas–to take a concept and be able to clearly and visually communicate so others could understand and get excited
about it.

Were there any particular classes, subjects or professors that made a positive influence along your entrepreneurial trek?

The Film and Video program was much more flexible than most other majors at GVSU. A project was assigned and there was no clear path on how it should be done. It allowed the opportunity to explore many options, and if the resources weren’t available, you had to get creative in how you could accomplish bringing your vision to life. Memorable professors, Dianna Morse and Kim Roberts, provided the environment for creative development and encouraged you to pursue your ideas.

Do you feel that GVSU fosters entrepreneurship?

It’s exciting to see the new programs allowing students to learn more about being an entrepreneur. These types of programs are on the forefront of education. It’s nice to be in this new wave, where entrepreneurship is fostered, rather than focusing on the more traditional employment route.

What improvements could be made to help students who want to start a business?

The biggest improvement is furthering the startup community outside the campus. The more that like-minded people in the area can connect and establish a hub for ideas, talent, and investors, the more opportunity will be available to us all, including access to the resources needed to start and maintain a business. It’s a problem when people think they have to be in Silicon Valley, New York, or even Chicago if they want to start something big.

|Early Stage| The term “early-stage” is broadly defined as pre-revenue business development. Often, it means a company possesses a working prototype or defined service model, and has a detailed sales and marketing plan.

Find the full PDF of NEU on our website http://gvsu.edu/cei/neu-magazine-22.htm

Error: Twitter did not respond. Please wait a few minutes and refresh this page.